Pretty Day for a Run (Or) Pain is only Temporary but Rubber Band Legs Last all Day, “They” say.

I made it back to Memphis in good order and spent the past couple days trying to catch up on work, so how it’s gone so far work-out-wise is that I did 20 miles on Sunday March 25th, got a call from my mom that evening, flew to Arizona the next day, didn’t run again until that Thursday, got a bit of mileage in last week, and I haven’t worked out with Cheryl for almost three weeks.  You use it or you lose it They say, but what are you going to do?  It can’t be that bad, it wasn’t that long a time frame.

So – today is Wednesday and I worked with my trainer, Cheryl, for the first time in nearly three weeks.  She’s pretty, blond, petite and very fit and I have a huge Girl Crush on her, so I try to act all fit too when I’m working out with her.  This means mostly that when I feel like I’m dying I try to be real cool like it’s really easy.  Probably the gasping for air and the bulging eyeballs and the quivering muscles give me away but she never indicates she sees what a wimp I am and we end up doing 47 sets of fortythousandhundred reps all the time, which takes about 17 hours, but I’m a strong fit runner so I’m good with that, I’m not complaining even though my arm fell completely off and landed on the floor once.

I figured that since I was already in workout clothes, working out, I may as well get a run in afterward.  It’s a beautiful day, clear blue sunny skies, all the trees leafed out in fresh spring-green foliage, lots of happy birds and squirrels all flitting about chirping and making whatever little happy sounds squirrels make, and I was ready to get some fresh air.  The fresh air thing has been hampered the past couple weeks by the fact that I apparently managed to get allergic to something in Arizona the day I arrived and I spent two weeks blowing my nose at 3 minute intervals while my swollen red itchy eyes watered and I broke out in hives on my legs one day and my chest another day – all complicated further by the fact that I cannot take allergy medicines *sniff* *sniff* *blow* *eyes water* *ha-choo* repeat and also those damn hives are itchy.  So a pretty run in the non-allergenic Memphis air sounded really nice.  (yes, honestly, I’ve been tested and have no allergies … in Memphis, Allergy Capital of the  World … I know you will not believe me but there ya go.  I’m the only living person in the mid-south with no allergies.)

I’d originally planned to do five but had decided to cut it back to three (miles).  I headed down the street and after three (steps) realized that an hour of working out with Cheryl is an hour that lasts as long as Christmas Eve for small children and my legs felt like overstretched worn-out rubber bands.  Pride, however, kept me going.  I wasn’t going to come to a complete stop and walk back to the car in front of my girl crush, no ma’am.  I made it to the end of the block and walked.  I trotted, the legs wobbled like a cheap camp chair underneath a gorilla, I walked, I trotted, the legs wriggled like overcooked spaghetti, I walked, I trotted … a mile in I turned around.  2-1/2 weeks ago I did 20 and felt better than I did at the end of that mile.

They are not kidding when they say you use it or you lose it.  I just didn’t know they were speedtalking.

Also, here’s a picture of me working out with Cheryl and also one of my run.  Even though my butt didn’t end up falling off when I did the 20 miles it felt like it might and I’m still the Posterchild and National Spokesperson for BFOS and the paparazzi are still loving me so they took a bunch of pics and gave them to me, free.  Because when you’re famous that’s how things work.  Altho I’m still waiting for that Lamborghini.  I didn’t know they were on backorder for three years, did you? 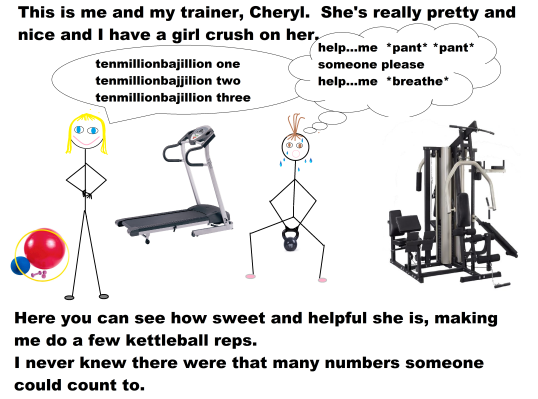 Here’s a picture of my run.  Apparently my legs not only felt like overcooked spaghetti, they looked like it too.  And those damn Birds were making me Angry.

4 thoughts on “Pretty Day for a Run (Or) Pain is only Temporary but Rubber Band Legs Last all Day, “They” say.”