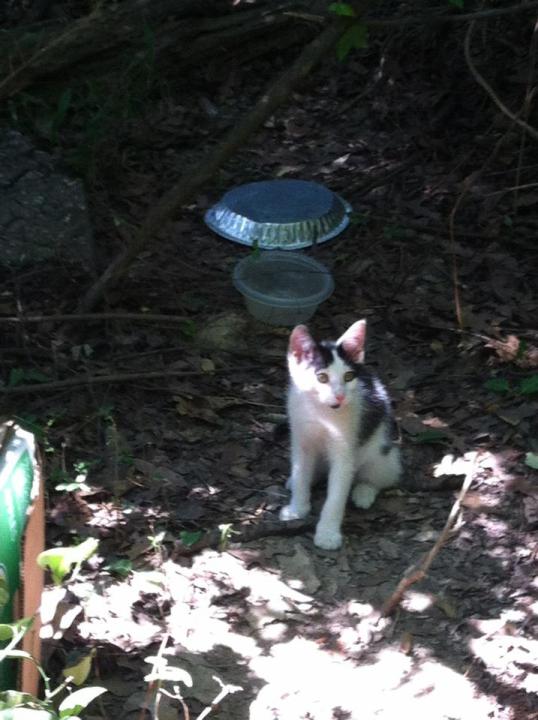 One day around the first of June a little black and white kitten with exotic slanted golden eyes and a black goatee somehow ended up by himself on the Wolf River Greenway (a corridor of paved, protected green space paralleling the Wolf River, which, along with the Greater Memphis Greenline, will eventually be a series of paved trails extending 30 miles from downtown Memphis through Collierville).   (I admit:  I plagiarized nearly all of that information.)  (And when I think of having 30 miles of contiguous trails, I momentarily feel bad that I think Memphis is such a small-minded, backward town.)  (But then I read the paper the next morning and realize it is a small-minded, backward town.)

We are going to allow benefit of doubt and assume this shy, quiet, reserved little guy somehow managed to misplace himself from his loving home, and not that someone tossed him into the woods to rid themselves of an … “issue”.

About this time a very nice lady – while not a crazy cat lady like some we could name – was walking the Greenway and saw this little boy.  She spent the next six weeks bringing food, setting up a little bedded area, stringing play toys in the trees and trying to get him to trust her enough to come to her.

A few weeks after he moved into his new “home” in the trees and Sandy took up the cause of rescuing him, I was running the Greenway with one of my BRFF’s, Lisa.  In fact, it was the same day she and I saw the infamous bobcat.  He seemed so happy and friendly, jogging along beside us and scampering about in his little fort of trees.  We stopped and wondered why he was there, obviously being cared for by someone but left to fend for himself in an area we knew has fox, bobcats, snakes – and a very busy 6 lane street about 20 feet behind him.  We both tried enticing him to come to us but as soon as we got within a certain distance (apparently judged solely by him) he quickly darted away, only to turn and come back, following us again.

Lisa has a heart of gold and big as a station wagon and it was bothering her that he was in such an unsafe situation; I knew it was bothering me, I felt I was supposed to have him, rather like seeing Chunk’s little face that day on the post from the infamous Memphis Animal “Shelter”.  Like I should have him.

I immediately realized I was hallucinating – again – so I smacked myself upside the head and Lisa and I continued on our way.

I did still wonder about him and hoped he was OK, but I’m old enough now that I’ve realized the Saving The Whole World thing is unrealistic and you need to let some things go.  Someone appeared to be caring for him, and what did I know?

Happily, a few days later a friend (another crazy nutjob runner who is also a crazy cat lady, there’s not a lot of room left in her life for any more crazy although I think she occasionally tries stuffing a bit more in) was riding her bike on the Greenway and saw Sandy doing her thing with Mo.

Elizabeth immediately jumped off her bike and started trying to help.  She posted a pic of the little dude on FB and announced to all that efforts were underway to rescue him before he became feral or food.  I was so glad to know someone was trying to catch him; Lisa and I did a FB High Five and Shout Out to Elizabeth.  It still took a couple weeks but finally they were successful, as Sandy lured him into a cat carrier with a trail of salmon, the carrier door rigged with string to pull it shut when he got inside.  Someone needed to give him a home, so Elizabeth volunteered.

Elizabeth, however, already had a dog and three cats; within a couple of months it was obvious little Mo needed a new home and Elizabeth and family needed a break from buying pet food by the ton, delivered in a pile on their driveway.

Meanwhile I’d spent a couple of months trying to decide if we needed to get a second cat.  Murphy is very content to entertain himself, he remains ever hopeful that eventually that damn squirrel WILL fall out of the tree and land in front of him (which did happen to Lisa’s dog immediately after she looked at him, sitting under a tree staring up at two juveniles playing above his head, and said, “What do you think, dog?  The squirrel is going to fall out of the tree and land at your feet?”  At which moment, the squirrel did.  And was instantly dispatched by a victorious dog.  Meanwhile his buddy up on the tree limb watched.  “Duuuude.  Mom’s gonna be really pissed.”)

When Murph isn’t expecting squirrel manna to fall from the sky he happily barks like an insane fool at the new dog next door, Barkahoula Sir Rowfer.  (that’s not really the dog’s name.  I made that up.  It’s name is something vapid like Maude, I can’t remember for sure.  But it barks with the volume of a high-end stereo system on steroids with the bass turned all the way up.  BARRRHHK  ROWWHHFFFFF.  I can hear it upstairs on the other side of the house.  “There goes Barkahoula again,” I sigh, and turn the TV louder.)

Chunker, however, seems to be living up to her name a bit more each day and wouldn’t even play with toys any more.  I got a laser light.  She loved it.  For two days.  Then every time I turned it on she just watched my hand, not the red dot.  She’d look at me, look at my hand, look at the dot.  Then she’d look at me again.  “What?  You think I’m an idiot?”

I got one of those clear plastic stick things with the string on the end and what appears to be an intricately tied fishing fly on the end of the string.  You bounce it up and down and the cat thinks “Damn!  A BUG!” and it chases the bug happily for hours.  Or, not.  Maybe the cat just looks at your hand and the end of the stick and sits there, on top of the un-bug.

I’d been mulling for a while whether to get another cat and Chunk could have a friend.  Chunk tried to talk me into never minding about a friend and just letting her outside to chase the squirrels but I DQ’d that since I’ve seen fox and hawks around.  Every once in a while I’d talk to hubs about it, but we just couldn’t decide.

Then about a month ago Mo’s little face popped up on FB and Elizabeth sadly announced she was looking for a home for the little buddy. 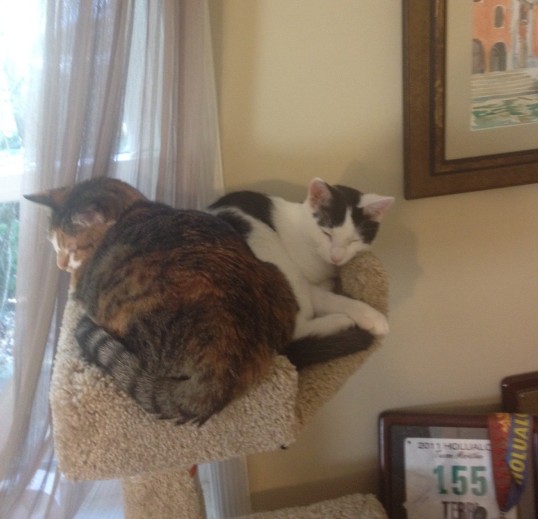 Munker and Mo sharing the cat tree for a nap.