Of all the Joints…

I’m at the computer for the first time today, having spent the day on the couch but definitely needing a different position for a minute.  The short of the story is I did get the S1 Epidural steroid injection; I also got an SI joint injection which I didn’t expect but when the Dr. hit that magic sore spot in my lower back we realized I have an issue there, too.  Checking in with Dr. Google on the SI joint and accompanying issues I think that’s been part of it all along but I’m not a Doctor nor do I play one on TV.

I said, “all I want is to get back running.”

I’m thinking no response was a good response.  Don’t you two think so?

Here’s what I know right now:

Hi, so mom got up and went back to the den, I guess she got tired of writing to you.  She put some silver plate into the TV box and now she keeps saying something about Eric Northman who I have no clue who that is but she like, sighs a little bit so apparently he does a really good job on HGTV building houses or something.

Anyway, we did finally get rid of all those miniature humans banging on the door last night and mom let Murph T. Idiot out of the bedroom and he ran around the house barking and sniffing everything like he thought they’d all buried bombs around here.  Which that is just stupid because he can’t be a bomb sniffing dog because I think bomb sniffing dogs, for the most part, have to be around men and Murphy hates men.  Except dad and my brothers.  And PUNKIN.  He likes PUNKIN a lot.  Probably because of the food dropping thing that goes on. Murphy is an idiot, but he knows where to find food, I will give him that.

Wish he could find some food for me.  Mom keeps hiding it all.  Mo gets a bunch and I get a little tiny bowl.  Sometimes Mo doesn’t eat all his and I sneak in and eat it.  Except mom has supersonic hearing and makes me quit.  Then I try to eat some of The Idiot’s food but mom keeps putting a saucepan lid on it.  I thought the saucepan lids went with the saucepans, but it doesn’t look like it.  Maybe it’s like a steering wheel which doesn’t have wheels, as far as I can tell the few times I’ve had a near death experience and mom says STOP I have to hold onto The Steering Wheel which doesn’t have a wheel.  Then she started cramming me into the box of Near Death so now I can’t try to escape that car thing, I’m just stuck inside it inside the Box Of Death.

I hate the car thing.

Anyway, since Mom is asleep in the den, drooling, I thought I’d spend some time surfing the net and I found a new video of my favorite cat Henri.  *Sigh*.  He’s french and he speaks french and he’s so swavy and debahnair and aloof.  Aloof is very important in a cat.  I love Henri.  If I ever learn how to write a letter on this internet thing I’m going to ask for his autograph.

He just released a new movie, if you’d like to watch it.  I think you should.  He’s quite excellent and handsome.

Here’s a link to the video

I’d like to paste the video in this page but I can’t find mom’s credit card to buy that option.  She’s so cheap.

Now Mom’s in bed so I’m going to go sleep on mom’s head and dream of Henri.

Oh, here’s my favorite picture of Henri.  This is the picture I would have him autograph.  Maybe he’d sniff my nose, too.  It would be nose sniff love at first sight I bet.

See?  He understands me. 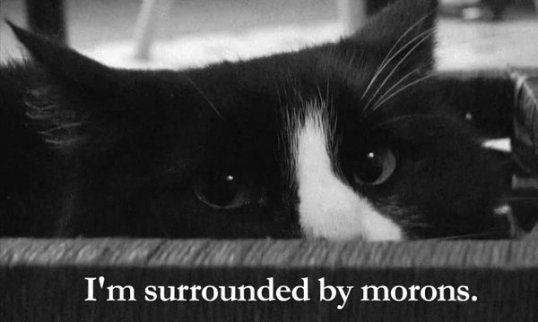