I abhor Velcro.  Velcro is in collusion with this damnable boot to drive me over the edge, clinging fearfully to the wrong side of the boot, grip of iron, it won’t let go “NO NO! you can’t make me!” as I desperately attempt to get even a fingernail slipped between the clinging Velcro and the boot.  I try folding it neatly back upon itself so when I put the boot back on I can just unfold it and tighten.  No.  The moment I turn my back all the Velcro straps flop open and take turns sticking to each other and the other side of the boot.  Nanner Nanner Nanner they say, passive-aggressive payback because they know – they KNOW, they are SENTIENT and they know that I secretly hate the boot and, thus, I hate them.

THEY started it.  Both boot and Velcro black as night, I can’t see the end of the Velcro strip hiding like cowardly Velcro chameleons behind the boot, my foot held captive as I stretch to the left and to the right trying to peer at the back of the boot.  Oh, I know what you are thinking, there, all smug in your shoes.  You’re thinking, just take the boot off, straighten the straps and put the boot back on.

I can’t!  They KNOW!  I tried!  I took it off, I pulled the Velcro nice and straight and slid my foot gently into the boot not to disturb them.  Distracted trying to keep my jeans from bunching into a baseball-sized-knot rubbing a sore on my ankle, I looked away for just one second – just one! and they turned into super-glued velcro spaghetti.

I am an adult.  I am stymied by a strip of fabric.

Even better, today when I finally got the boot on – and Boot needs a name, by the way, so we are having a naming contest, winner gets 47 majillion points so post your nominee to the FB post linked when I publish – I got to wrap it in garbage bags and duct tape it shut so I could wander around the RRS half marathon all morning in the rain.  I bought a rain suit at Bass Pro Shops.  It was a size medium.  I failed to realize that many of the Bass Pro Shop customers are hulking males who can heft big guns and large dead animals.  The result was me hobbling around in a garbage wrapped boot (which probably further angered the Velcro, I’m sure they all felt I was dissing them) in rain suit pants which reached from just below my armpits to about 5″ past my heel; rain coat hanging halfway to my knees and to the tips of my fingers:  lurch-thud, lurch-thud, lurch-thud. 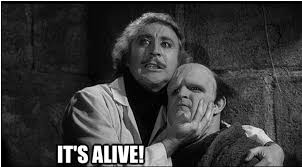 And I’ve been nice to Boot.  I even decorated it yesterday.  It’s not Boot’s fault that I hate it, I’m trying to be fair here but if Boot and Velcro continue with this attitude things could go bad fast.  Which is a hollow threat because they both know I have no control in the situation.  *Sigh*

Today one of my BRFF’s, “Lisa” brought me some awesome little foot/toesies covers to wear so my toes don’t get cold.  Her sister “Robin” (which may or may not be their real names, identities obscured at random to protect the innocent who never asked to be publicly associated with me) was in a boot (sadly) but (happily) she loves to knit and made the little Toesies.  One is a kitty, so guess which one I chose to wear first?  And you are both lucky I’d already put it on because while I love you both, faithful lonely followers of my World Famous Blog, I don’t love you enough to return to battle with the Velcro.

Isn’t it cute?  I will love him and squeeze him and call him George.  The Toesie, I mean.

Despite the travails of the Velcro War and lurching about like a man-made monster we did have fun today, in the rain, working the race.  The MRTC runners are AWESOME and we love them, crazynutjobrunners currently under- or un-medicated but we won’t tell.  After the race started another BRFF, whom I shall call Sara, and I drove the course, hubs in the backseat, doing the driving himself which I have no idea where he got that from, “watch out for that car!”  “watch out for that runner!” and how he saw them, nose deep in the newspaper in the backseat, I have no clue but should not be surprised because he did the same thing with the kids. Didn’t have to even look up.  DO NOT PUSH YOUR BROTHER DOWN THE STAIRS, he would state, calmly, in his booming voice.

We honked and beeped and waved at the runners, sometimes when the rain was not pelting sideways at one side of the car we’d open a window and shout at them.

GO RUNNERS!  YOU LOOK GREAT!  YOU CAN DO THIS!

They would wave back, rain dripping off their faces, miserable, whipped by 20-30mph winds with gusts.  They definitely earned their stripes today.

At the turn around we waited for Sara’s Doug which she says sort of like  ♬♪Doug♪♬ all syrupy so we almost got diabetes.  She jumped out into the pouring rain and waited for him, giving him a kiss and hopping back in the car.  Still staring at the paper hubs muttered, Terri wouldn’t jump out in the pouring rain to kiss me.

Well of course I wouldn’t.  My leg is currently firmly stuck to the fabric of my car seat by an angry rogue strip of !#&!’ing VELCRO.

3 thoughts on “Getting the boot.”