It’s the end of the world as we know it.

It’s the end of the world

That’s great, it starts with an earthquake, birds and snakes, an aeroplane –
Lenny Bruce is not afraid. Eye of a hurricane, listen to yourself churn –
world serves its own needs, regardless of your own needs. Feed it up a knock,
speed, grunt no, strength no. Ladder structure clatter with fear of height,
down height. Wire in a fire, represent the seven games in a government for
hire and a combat site. Left her, wasn’t coming in a hurry with the furies
breathing down your neck. Team by team reporters baffled, trump, tethered
crop. Look at that low plane!

This is what my brain sounds like in my head.  So, I’ve started making lists.  Lists are very good.  If you can find where you put them.

Unfortunately, lists also tend to make me feel slightly overwhelmed.  It seems more stuff gets added than gets crossed off.

And, really, do you need to put laundry on a list?  I think not.  I think I will cross that off.  It’s not like, when I look in the drawer and have no more clean socks, I’m going to be unable to understand that laundry needs to be done.  And the very helpful — but incredibly irritating – incessant pinging of the dryer when it’s finished usually inspires me to get the clean clothes taken care of.  Someone got paid to create that sound, and it wasn’t me.  They got money to irritate people.  Dammit.  I do that all the time and I never get one penny.

Speaking of appliances, do yours say words?  Mine do.  And they say the same words every. damn. time.  Could they change up the conversation?  No.

I got up this morning, looked at my to do list and thought, it’s Monday.  It’s not 8am.  So I turned the list over and now all I have is a blank piece of paper.

I think this is a metaphor for a lot of things in life.

How important is it?  Important enough to be engraved on a list?

How often do we replay shit in our heads that we would never write on a list?  He said she said they didn’t they did they never I never she never they always I always they always.  Particularly if the conversation in our head contains negative content more than 24 hours old.

God I wish I could turn my brain over to a clean sheet.

Anyway, it’s Monday and I have a list, I’ve had my coffee, and it’s almost 8am.  I’m going to try working on the list on the sheet of paper and ignore the list in my head.  I’ll stream some R.E.M. and leave you with this #firstworlddogproblem:

The sprinklers are on in Murphy’s favorite part of the yard. 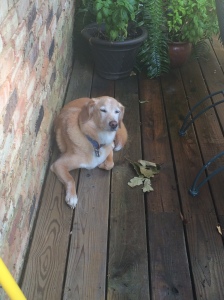 Sadder Murphy.  I’mma hide in this corner, here, and the sprinklers will go away.

I just checked again, now the sprinklers are done.  Murphy’s plan of action worked and they disappeared.  His world didn’t end.

Posted in Ruminations and tagged coffee, dog, end of the world, R.E.M., sad dog, talking appliances, to do list