Archive for the category “The world is random”

There’s a WHO? On the WHERE? Doing WHAT?

There are probably things both of you would bet you’d never hear your significant other say. Like, “let’s fly to France for dinner!” or “I just bought us matching Lamborghinis!”

Personally, until three or four years ago, I would have bet all day long that I would never hear the hubs say “There’s a drunk man on the roof trying to climb in the window.” But I would have been wrong.

A few years ago lightning struck our chimney and caught it and part of the wall on fire. I’d been at dinner with some friends and a pouring rainstorm started suddenly. We waited it out for a while but finally all dashed to our cars to get home. A couple blocks from home my cell rang and it was the hubs asking when are you getting home?? which was totally unlike him since he’s real cool about stuff all the time. I told him I was almost there. He said, “Lightning struck the chimney and the house is on fire” and I said, “Lightning? Struck the chimney? The house is on fire?” because I’m real good in situations like that, I’m on top of things, I grasp the whole picture very quickly and jump to action. So he (not so calmly) repeated the sentence. Which I then repeated back to him, again. I just wanted to be clear, you know. I don’t know about y’all, but in my world most phone conversations don’t start with the words “Lightning struck the chimney”. Between the three of us, though, I think it frustrated him, so I want to advise you both that if your special person does call you one day and says that lightning struck your chimney and your house is on fire, just go ahead and agree immediately and save yourself some time and frustration.

I’d like to note here that I’m actually a pretty quick thinker most of the time, but you throw something at me that’s outside my realm of expectation – for instance, I’m driving home thinking about work tomorrow and you tell me lightning hit our house and it’s on fire – I tend to take a minute to process. I kinda need a frame of reference. Perhaps something like thinking occasionally throughout my life that someday lightning might strike my house. But, no. Instead I thought about things like would the kids ever grow a brain or could I legally lock them in the closet until they were 18? Which, by the way, kids do grow a brain, but it takes them until they’re about 25, so don’t hold your breath.

The upshot of the lightning and ensuing fire was that we got the dining room, den, stairway, entryway, hallway and one bedroom painted by the insurance company, due to smoke damage, along with them repairing the holes the enthusiastic fire department made while chopping out the burning wall (which I was very happy to let them do, didn’t bother me a bit. Chop away, I say! Chop away!), repairing the hole in the sodden ceiling where the water ran through, etc. We decided it was a great opportunity to get some needed work done, and paid the crews to finish painting the rest of the house, paint the kitchen cupboards and some other things. The next six weeks turned into a Where’s Waldo existence where one morning the spoons and bowls might be on the den floor, the next morning in the bathroom on the counter, the dresser might now be in the dining room – something was always making funny noises and it was basically controlled chaos. Since the paint was pretty smelly I kept all the windows open most of the time; fortunately it was also a beautiful time of year and it was nice having the breeze blow through the house.

What happened was hubs was upstairs in the bathroom minding his own business when a head popped up in the window.  “HEY!  Get out of here!” shouted hubs (or something like that).  The drunk guy put his hands up and slurred sloppily, “I’m a good family man, don’t shoot me!”  With what would hubs have shot him, had Drunk Dude not been a good family man?  Eh?  It’s a bathroom.  Do you need to have a permit to carry that hairbrush?

Poor hubs, frustrated beyond belief, finally just grabbed the phone himself and called. I got some jeans on and we went outside to await the police. Just in case the drunk guy made it in through the window, I guess we figured it was safer in the dark, alone, outside. The police pulled up, lights off, sirens off, and got reluctantly out of their cars. They shined a flashlight in our faces and asked if someone here called about a drunk guy climbing in a window. My husband said he did. The police seemed to be watching intently, and I realized they thought maybe they were looking at the drunk guy right now. Hubs said, “Yes. About 5’8″, sandy hair, red t-shirt” which seemed to convince them. They shined the super-powered flashlight on our roof and I screamed and pointed – THERE! THERE HE IS! but hubs replied calmly that I was looking at the turbine on the roof. Well, it was round and about the size of a head. You’d have done the same thing.

I tell you what. In real life, cops do not jump out of their cars, guns pulled and ready to rumble. One shook his head and muttered, “All we’ve had all night is a bunch of drunks”. They sighed, and turned to go into the backyard and see if they could find the guy or any evidence of him. The short one led the way; 10 feet behind him was the 2nd guy, a cop that must have been a college football linebacker. Both were shining their flashlights around, hands on holster, moving slowly. Hubs started to follow them. Hellsbells I’m not staying behind! So I crouched down behind hubs, grabbing his shirt in both hands and peering around his shoulder.

Nothing. Nothing and no one. They decide to patrol the area for a while and we returned to the house. Hubs kept watching out the window. Ten minutes later he shouted, call 9-1-1, the guy just walked into the house next door!  This time I was ready. I dialed 9-1-1 and the cops returned. Turns out our neighbor had a “band” and his “friend” was playing with him at their “gig” and when they got home he went outside for a “cigarette”. Apparently when you go outside for a cigarette at 2am the preferred means of returning to the house is not through the unlocked front door but to climb the patio decking and attempt to enter the house through the upstairs bathroom window. Hey. That’s how I always do it. When I do, though, I always make sure I drunkenly climb the lattice work and aim for the bathroom window at the correct house. We declined to press charges and went back to bed.

But I never left that bathroom window open ever again.

Posted in Ruminations, The world is random and tagged chimney fire, drunk man, lightning strike, on the roof

I don’t want to be in the same lane as the car using McDonald’s braille menu on the driver’s side of the drive-through. 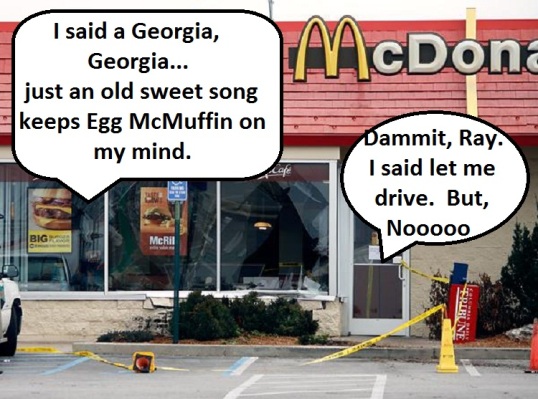 Posted in The world is random | Leave a comment

Every morning when I wake up this tree is staring in my bedroom window so now I hide in the bathroom to get dressed.

Posted in The world is random and tagged creepy, tree, window | Leave a comment

documenting my journey through life