Archive for the tag “cold from hell”

Karma, or Enter the Spawn. 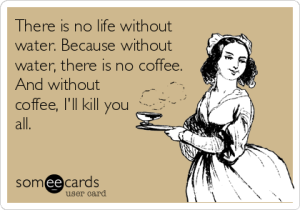 Having birthed the spawn of satan into the world on a napalm flow of snot for the better part of the day yesterday and later coughing out the rest of his minions through my lungs I’m a bit worn out today; copious amounts of coffee are just as spitting in the wind.  On the plus side I got an abs of steel workout without buying a DVD.  Another notch on the plus side:  I can see again.  Thank God it appears Vicks Vaporub is not fatal to eyeballs.  Also it is, indeed, possible to “Cry Me A River”.

“So you took a chance
And made other plans
But I bet you didn’t think that they would come crashing down, no.”

That’s where I went wrong, once again flying high on getting a run Thursday and immediately taking a chance, making more plans (this run is good!  I’m back!  OK, Friday I’ll do this and Saturday I’ll do that and Sunday it will be …) only to crash to earth Friday morning, victim of human frailty and satan-worshiping germs as the Virus From Hell wrapped me in its evil embrace.  BWAAAHAHAHAHA it chortled as I choked, lungs aflame.  GO AHEAD!  MAKE PLANS!  BWAAHAHAHAHAHA!

Yesterday when I woke it appeared I was (mostly) done coughing and, unaware a lava flow was busy heating up inside my head, I failed to realize why I was feeling down, instead blaming it on the fact that my friends were lining up at the Swampstomper start and I wasn’t.  A couple hours later I realized as far as Swampstomper went it’s just as well I broke my foot unless the karma gods, if I hadn’t broken my foot, would have spared me this cold; either way, not running because of the foot or trying to run with a healthy foot but this cold, it’s obvious that race was not meant for me this year.  Never trust the karma gods.

It’s disheartening to realize, as I do occasionally before I can force myself to forget again, that the first day I ran pain-free since July 2012 was the same day I broke my foot.  Those first two miles – my brain singing the Hallelujah Chorus  (which you need to watch right now because I just watched it again and it’s going to be a few minutes before I can type much since I’m crying coughing choking laughing, so you have a break) – those first two miles, pain-free!  I floated, gloating, certain I’d found the cure, that running Nirvana is now MINE MINE MINE, clutching the joy … and then I took one more step, too greedy – but those two miles – they were heaven.

It’s human nature, I suppose, to continue to think surely this is the day, certainly it will be like it used to be or even better.

If this thought is based upon some provable fact, yay, you’re right.  “Today will be sunny.  See?  There’s the sun, shining.”  Additionally the odds are you do not live in Memphis.

If this is based on cheerful hope, you are an optimist.  “Today will be sunny, ” you think, living in Memphis, you foolish fool.

If this is based on a belief in some type of cosmic lottery which says at some point it will be time to ease up on any given person, it’s idiocy.  “It’s rained for 24 hours, surely the sun will shine in Memphis today.”

Although I’m not really sure what the cats did to piss off Karma I think I should check the closet.  I bet they pooped in my shoes.