Archive for the tag “window”

While I would describe myself as a realist rather than a pessimist, I do think it’s fair to say that most realists are probably a bit pessimistic just by nature of realizing that things are pretty much as they appear – which means, sometimes, pretty crappy.

The hubs, however, always thought I was a pessimist.  For example, if you have four-year-old twin boys in the middle of the den floor playing Teenage Mutant Ninja Turtles with empty papertowel-tube swords in a fort made of all the couch cushions (which, by the way, if you have any children in your home under the age of, oh – 16 – and you buy a couch with unattached cushions, it’s your own damn fault and don’t come crying to me because I learned the hard way and I guess you’re just gonna have to, too), and you put your cup of diet coke in the middle of the coffee table, and your wife says, “that cup is going to get knocked over” maybe the husband thinks the wife is being negative, while the wife is simply and fully aware of the fact that the beverage is not long for this Ninja Turtle-inhabited world.  And also that the husband has done the same thing in the same situation 8 times already which is why the supply of cups in the house is rapidly dwindling since four year old boys can destroy plastic as easily as glass.

This morning was a great chance to add some positivity in my day since it was supposed to be 15-25 mph winds with tornado watches.  Watches are different than warnings.  It’s like Code Yellow vs. Code Red.  One thing I’m positive of:  Memphis weather is psycho, and Code Nothing can go to Code We’re All Gonna Die in about a minute.  Also I’m still having relationship issues with weather.com, as you both know.  We broke up early last week and then on Sunday weather.com was so nice to me, gave me a beautiful sunny, slightly breezy, not-too-warm not-too-cold day and you know how it is when they bring you candy and look so remorseful; we were back together although I did state emphatically that This. Is. The. Last. Time.

I was positive that Cat was using my undercover toes as batting practice at 5:15 this morning so I got up and decided to be happy about the fact that God made coffee as I visited the Shrine of Glorious Coffee Making Perfection, pouring dark steaming nectar into my favorite mug *sip* *sip* *sigh* now I don’t have to kill anyone, you can all come back into the house.   I’ve got an hour on the books with Cheryl, aka The Exorcist, Jr.  Despite the fact she insists she’s just a trainer I am convinced she does not sleep and spends the dark hours of the night dreaming up new tortures.  Something about the way her eyes glow and spin when she thinks I’m not looking, I don’t know, it doesn’t seem right.  After the reign of terror I’ll do 5 easy miles.

Weather.com gaily informed me that today I am looking at:

This does not sound like weather I want to do 5 easy miles in, but I’m willing to wait and give things a chance (see how positive that was?)

I worked out with Cheryl and she didn’t seem to want to kill me completely dead, so that  would be a positive thing.

She has a gym in her garage and we worked out with the door open.  That was positive.  It’s also probably the reason she didn’t seem to want to kill me completely dead.  The neighbors might notice.  That would be a good thing – another score for positveness.

Plus it was pretty funny watching her chase the recylcing down the road when the wind blew it out of the recylcing bucket.  That was defnitely positive.  Made even more positive by the fact that she was running in a pair of Danskos instead of running shoes.

The wind kept blowing and the clouds kept growing larger and darker and I wavered – should I chance a run outside or stick with the treadmill?  (I didn’t call it the *D*readmill – Positiveness)

I did a mile on the *T*readmill and decided to chance running outside before my brain fell out from boredom.  I wasn’t hearing any sirens, there were no end-of-the-world warnings screaming across the bottom of the TV screen and the rain hadn’t shown up yet.  See how this positivity thing is really falling into place for me?  This is getting encouraging.

And when I was finally headed east on the final 1/2 mile, the wind was at my back.  Suddenly I was running what should have been a 165HR pace at 136HR.  Honestly, this positivitiy-ness thing is working pretty good!  I’m not even too mad at weather.com that the promised damaging winds and large hail haven’t shown up while I sit here with the window open and the sun occassionally peeping out of the clouds and a warm kitten sleeping on my lap.

Every morning when I wake up this tree is staring in my bedroom window so now I hide in the bathroom to get dressed. 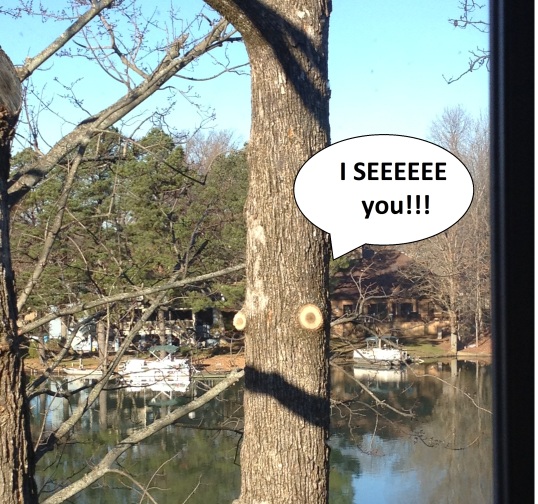 Posted in The world is random and tagged creepy, tree, window | Leave a comment